As we improve the application, we’ll improve this help page.

A list of the most recent updates and modifications can be found at the bottom of this page.

Note: this is an early release – there are a few known issues with the application. There’s a good chance you may encounter one or a few of them along the way.  If you get stuck, just hit the reload button on your browser to start new.

For a successful experience, keep it simple – use closed polygon’s, upload .KML files with a single polygon/parcel.

We’re working on error checking and graceful failures. Please be kind with your feedback.

If you’re unfamiliar with flight planning applications for aerial mapping, aerial surveying and aerial photogrammetry, here’s a brief overview of the user interface:

The region on the left side contains all the settings and selections needed to to calculate the main items:

Select a camera or enter custom image sensor information.  Adjust the Altitude and Speed that you plan to fly. Select Forward and Side Overlap.  As you do this you’ll notice that real time results are being calculated based on your entries or selection.

For typed input, the calculations will automatically occur 3 seconds after you’ve stopped typing.

After importing a KML, a flight plan will be calculated for the parcel boundary (polygon) and both will be displayed in the main section of the page.

What is a KML file?? Most folks use Google Earth (free) to draw a parcel boundary (closed polygon) on a map, then save this as a KML file from within Google Earth. Search for “kml file” on Google and learn more.

Note: KML files can be very complicated with markers and lines and such. Items other than closed polygons may cause this application at this development stage to hang up or crash or display continuous pop up messages.  If that happens, reload the web page of the application and start new (and use a different KML file).

The handle of a slider is highlighted by clicking on it. Then use left and right arrow keys to adjust with finer control.

Feel free to Import a KML file before tinkering with the settings.  The first flight plan will use the default settings.

Hint: click on the handle of the slider and use your left and right arrow keys to increase or decrease AGL or Groundspeed with finer control.

If you adjust any of the settings on the left side, the flight plan on the map will be updated dynamically!

This region above the map only appears after a KML file has been imported. It includes

This region above the map only appears after a KML file has been imported.

This region between Map Options and the Map contain various data points about the parcel and the plan.

We call these “data blocks.”  Data blocks only appear when a flight plan is created. They show different data points about each boundary and flight plan. Any adjustments you make can affect the data (e.g. Total Images may change if you change the heading). We will add to this data in the future.

Note: If you plan to review the GPX file in Google Earth, select the options as shown in the following dialog: 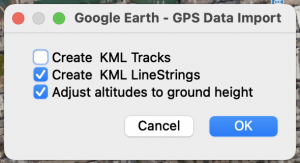 What is Long Edge Heading?
Long edge heading is the heading of the longest edge of the polygon you imported. When flights paths are first calculated and drawn over the parcel, they will use this edge’s heading. If you change the heading, use this data point as reference to move it back to the original direction.

Terrain data will be shown in Meters or Feet, depending on the AGL radio button selection. 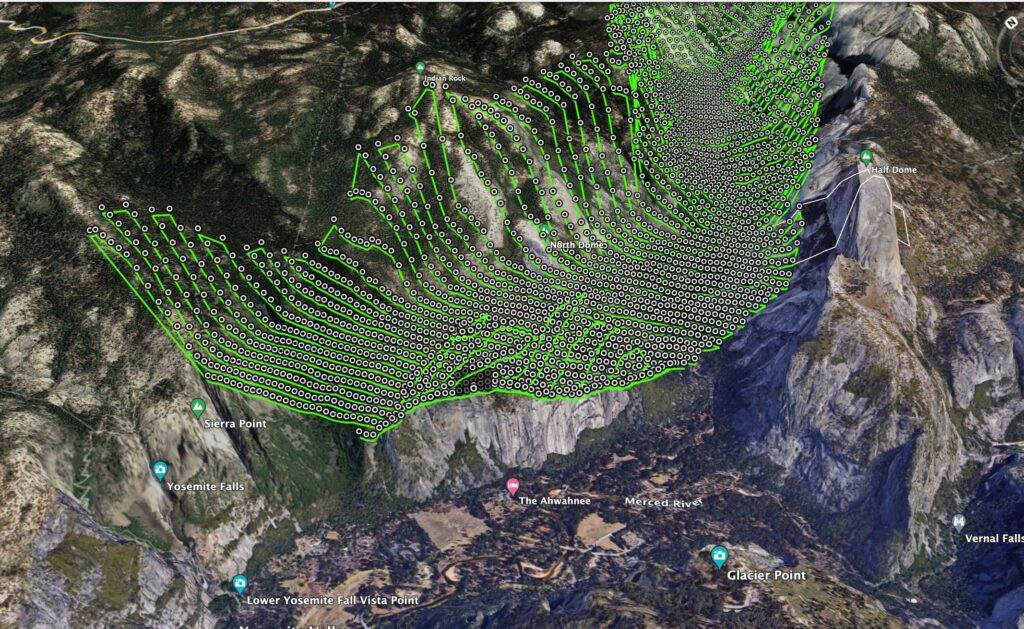 February 26-July 2022:  We have released limited support for All US States including Hawaii and Alaska (Alaska below 60N), Portugal, the Bahamas, Costa Rica, Puerto Rico, Kenya, Czechia, Denmark, Germany, Netherlands, Ireland, United Kingdom and South Georgia-South Sandwich Islands. More will be added as we continue to test and evaluate.

To include elevation data with your plan, download a KML file with “Paths with Trigger Points.” Check the “join paths” box if you want a contiguous flight path.  If elevation is available, each image location will contain elevation data, including altitude (AGL), heading, and ground elevation. 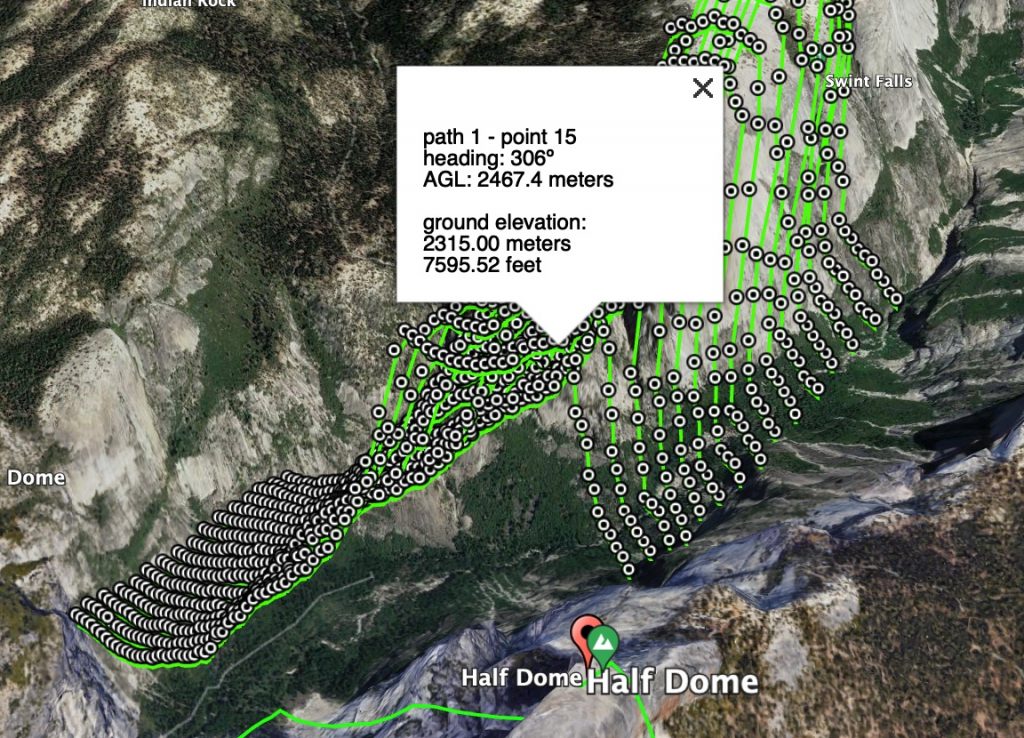 The data we use is 1 Arc-Second Global data, read about it here: https://www.usgs.gov/centers/eros/science/usgs-eros-archive-digital-elevation-shuttle-radar-topography-mission-srtm-1.

Note: Please review in Google Earth to ensure all points have proper elevations prior to using for real life planning.  This is a feature in development and there may be some anomalies.

Feedback regarding elevation data, and how you would like to see it delivered in the downloaded files (.KML and .GPX) is appreciated (admin[at]skyimd[dot]com).

Very large parcels may take a few seconds to render on the screen.  Until the flight plan is displayed, the user interface may appear to be unresponsive.  It’s best to adjust your camera and flight parameters first, then import the very large parcel KML file.

If the user interface seems to lock up for an extended time, refresh your browser and try again.  Or try reducing the  size of the parcel.

Extremely large parcels are best saved as “flight paths” only.

Very large parcels that are saved “with trigger points,” may take some time to open and review in Google Earth.

GPX Files Not Being Imported Correctly

If your application is unable to read our .GPX files correctly, it may be due to the style of markup used.  SkyIMD and other applications (such as GPSBabel) output GPX files using Track Point <trkpt> markup.  Some applications utilize Route Point <rtept> markup.

A possible solution would be to change SkyIMD’s <trkpt> to <rtept>.  Here’s how that is accomplished:

Working with Thin Parcels – Corridors and Streets (no paths appear)

If you import a thin boundary and no paths appear, use the NUDGE arrows to nudge it into place.

We’ll add to this section as real questions and comments come in. For now we’ll use anticipated questions and real answers (e.g. Frequently Anticipated Questions … FAQ’s).

Why did SkyIMD release an “early” version product?

If we waited until it was final, it could be several months before we got enough testing in to make sure we addressed all the issues to get to beta stage. That would have also opened the door for “feature creep,” the “constant addition of new and exciting features and ideas” which would have continued to delay the release.

There are several flight planning applications on the market, some are a bit expensive, and some are more robust.  We built this one so we can run it anywhere (on our Mac’s, in the plane on our flight laptops/Windows, etc.) where we have an internet connection (which is, oddly enough, readily available at 1,800 ft. AGL where we fly most).  Perhaps other flight planning software developers will improve their applications based on some of the ideas presented here and everyone will benefit.

The Interface, it’s so… PLAIN!

Yeah, well, at least it’s functional and hopefully unambiguous.  This isn’t really one of those applications that you’re going to stare at all day, it’s a productivity tool.  Think of it as your dynamic flight planning spreadsheet. Spreadsheets aren’t pretty either (though some of you do look at them all day… why?). Just calculate the plans based on the data entry and go fly!!!

When we finally get to beta stage, we’ll start looking at making the user interface a bit more appealing.

Why did SkyIMD create this application and why is SkyIMD making it available at no charge?

SkyIMD’s flight planner application was developed as an internal tool for planning our own aerial imaging and mapping flights.  We had been using a commercial application, but were frustrated at times by the constant re-entry of data to view iterative results.  Creating a dynamically updating map was crucial to stem our hair loss.

Workflow is key and speeding up workflow makes us all more productive. Deciding to make this available at no charge lessens the expectation of perfection and immediate technical support if something is amiss.

We’ll still endeavor to address issues quickly, but we have other things to do. Like building some pretty cool camera and sensor configurations for customers that acquire our FAA/EASA/ANAC certified aerial camera and sensor mounts for manned aircraft (e.g. shameless plug for our main business).

SkyIMD may change the business model in the future, especially if we get high use rates and Google starts charging us for use of their Maps API.  For now, it’s a fun project that in turn helps our customers (and hopefully everyone else in the aerial mapping business).

Did SkyIMD use Google Map’s API? How’d that go?

Yes. It was challenging and fun.  Google publishes the API specs and, well, we just had to read them.  We think we came up with some novel approaches to solving some of the flight planning needs, though all the heavy lifting is performed by Google Maps API.

Once we had an idea of what we wanted to do, the bulk of the coding was done over the course of two weekends (our only free time at the moment). The code ain’t pretty, we still need to do a ton of refactoring.

There’s a limit to the number of API requests we can make. We’re wondering when we’ll need to start paying for higher limits? Maybe that’s when we’ll ask for contributions or change the business model… or not.

Where to send feedback or comments?

Do you want to know about bugs?

Sure.  There are several.  Please keep it simple though – use closed polygon’s and KML files with only polygon data.

If you try to break it, you’ll probably succeed.  If you send an email, please don’t be offended if we don’t respond.

First we need to get this one stable, then we’ll look at deploying other online apps for the aerial imaging, mapping  and data market.

March 24, 2022 –  Fixed a bug where a second .KML boundary wouldn’t render on import.  This had to do with an issue with zoom level and fitting the map to the boundary of the parcel (zoom to fit).  Added Terrain Data Blocks when elevation data is available.

Elevation data is available for all US States including Hawaii and Alaska (Alaska below 60N).

February 26-March 18, 2022 – Fixed a bug with exported .KML files that had joined paths. Found a bug with the Nudge and 90º rotate buttons – if they are pressed in rapid succession, paths may fail to draw (workaround: refresh page, re-import and press these buttons in slower succession until this is fixed).

Introduced limited area support for Elevation data as described above. Select “Paths with Trigger Points” to have elevation data included in the KML or GPX file.   Using 1 arc-second SRTM’s data, rounding results. Interpolation creates some latency at the moment.

Fixed a bug where occasionally the heading was -180 on straight North-South lines, interfering with the operation of the quick 90º button. Phew, that was an annoying one.

February 2021 – Fixed a bug where KML and GPX formats were not being retained correctly.

June 2020 – Fixed a bug where the trigger point distance interval did not update on downloaded flight plan after camera and flight parameters were changed. Added Leica RC30 [user request]